It’s another regular day in the shop when Boomer finds out his ex-wife, Karen, skipped on her weekend with their son to go out with her latest boyfriend… Except the guy’s on dating apps, and he doesn’t seem to be as straight as it would seem — a fact Boomer would love to rub on his ex-wife’s face. 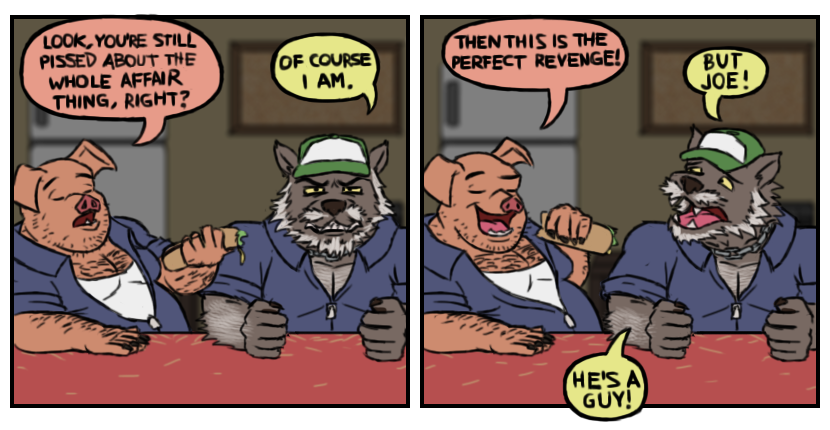 In this comic, Boomer and his coworker hatch a plan to get back at his neglectful ex-wife the only way he can: fucking her boyfriend!

Of course, fucking a guy may prove a challenge to our 100%, absolutely straight hero — but nothing that a bit of a vivid imagination can’t fix, huh? He can do it, just gotta think of something nice.

What could possibly go wrong?

If you have any issues viewing the comic in your browser, you can download it on the link below. One thing you can try if you're using mobile Chrome is to go to settings, then check "Desktop site", works for me.

The comic is finished, but if you want to see more of these characters, you can also follow my Twitter for more strips and other stuff. You can also support me on Patreon by clicking on the link below, where pages and strips are uploaded a week early. And if you liked Boomer's Big Date, consider checking out Minotaur Hotel, the visual novel I'm working on.

If you want more gay content, consider checking our and our friends' projects below!

I've been following you on Twitter and seen the characters, but didn't realize til now you had a whole comic of them.  I really enjoyed this and love the characters even more now.  Very well done. :D

This was... Amazing. Honestly got emotional. Best shit ever.

will there be a continuation of the story of boomers? or is it done?

Might be old news but I've been making strips that continue the story on my twitter and FA pages ( https://twitter.com/nanoff94 )

I'm currently working on a second comic with a new cast of characters, when I start posting that one I'll take a break from making weekly BMZ strips (I'll still post some pictures or strips with Miles and Boomer here and there though because the demand is still there), which is a good excuse to compile all the "sequel" strips up to that point on this page (plus bonus panels, extra drawings, etc.), because Twitter sucks ass for archiving.

If your question is more "will you make another 50 page comic like BBD as a sequel", not really, I think the strip format still has a sense of continuity (Miles and Boomer are both out of the closet and dating now, for example) and isn't that big of a commitment to a single idea. As much as I like drawing these characters, I don't want them to be the only thing I draw for the good part of a year. I've got lots of other ideas and plans.

Small update: Erniemesh made a Portuguese translation for the comic!
You can click the link to check out his Twitter.

Congrats on being the top rated comic on itch.io 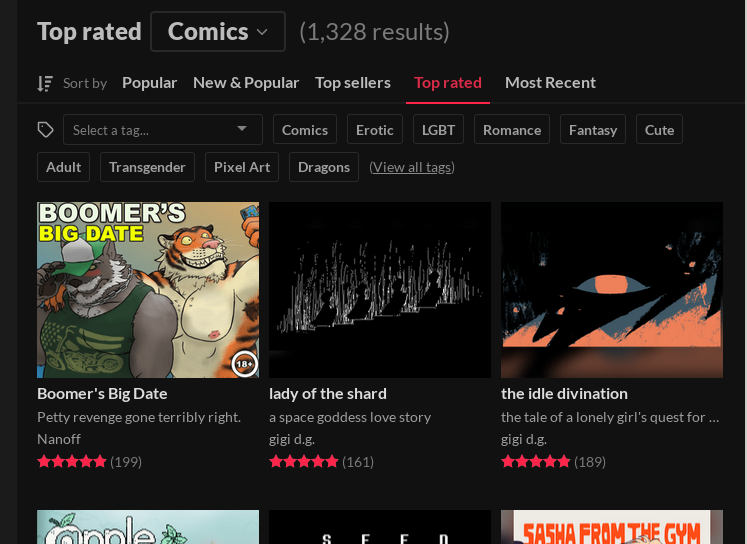 The comic is now available in Russian!
Special thanks to ShockaloAleksandr for offering out of the blue to do the translation!
Here's a link to his channel if you guys want to check it out:
https://www.youtube.com/channel/UCvggMaDDHE9NQbLkr3EZnJw

I don't see anything new...

Hey PaleAngel, nanoff just added the Russian translation to the downloadable files and to the embedded comic.

Oh, okay, makes sense. Thanks for the clarification! :)

That wrapped up really nicely :)
I'm glad that you managed to stay in the portrait of all the emotions going on, without focusing on the lewdness too much.

A few tables felt a bit... diluted and stretched, but I'm glad to have supported it. :)

I'm not sure if I'd love to see the same chars or completely new ones - I'm surely going to be peeking at Minotaur Hotel :)
(I didn't want to spoil myself the game with early version so far)

Characters are also shown in an interesting light. Boomer and Zoomer were originally made for short, shitpost-like strips mocking generational gaps and stereotypes. The artist has been able to give depth to them without betraying who they are at the core; much of the comedy still being related to what you'd find in the original strips. A fun thing happens when it comes to the naming convention. Boomer, Zoomer and Karen are all named after memes, such a trait is found in no other characters. What ends up happening is that Boomer is "stuck" in his stereotypes, and is only spurred into being deeper characters by those who have real names.

The idea of the simplified characters growing deeper, mirrors Nanoff's own transition from a mostly shitposting/pin-up artist into one who explores story-telling. One thing is clear as the comic progresses: the Nanoff at the end of the comic is a much better cartoonist and narrator than the one that started it. Especially when it comes to expression and blocking, the improvement is tangible and appreciated, furthermore fans are quick to point it out.

Alas, this is not the perfect comic. One of the biggest critiques I offer on the overall art is the difference of portrayal of different body types. Muscular, chubby and musclechub bodies are perfectly well represented, but thinner or more feminine bodies visibly fall short in comparison. The comic will also show an overuse of reiterations; some feel like they occupy more of the comic than necessary.

Regardless, none of its shortcomings are enough to bring the work down too much. Boomer Big Date works well as a stand-alone project and as a springboard into many interesting scenarios these characters can offer.

That was great. Seriously good work.

THE FOREHEAD KISS THO OH MY GOD

This was really great. I like the fact there was realism to the storyline. There are so many guys out there in the same situation as our two leads and with today's tech world it starts with sex but could lead to something more and all the baggage that goes along with it. The hand holding at the end was a subtle and a nice touch. Would love to see more of this story. Hopefully you will get the opportunity to continue it. Thanks again and a really well done job!

ok, i wasnt expecting that tbh.
i thought they would be stubborn, until Miles decides to fix something and go to Boomer's workshop. and then magic happens with an amazing confession in front of all.
meanwhile, his what so called wife, would be somehow punished or something.

oh i know the feeling, right now, he want miles so bad but doesnt know what to do as he feels guilty, i say, kiss him an apology. if the last thing i want to remember you with is a kiss rather a fight. even if i'm guilty, i wish in your heart to find the part where you saw good of me. as i saw how good you are.

outstanding, a finally confession, i want more. please, try to think of an extended version of this, i hate to know it is going to end.

Happy to hear people want more, I'll be making more strips with these characters after this comic is done. I have another long comic in the works but it's going to have to wait, really busy working on Minotaur Hotel right now

I forgot to update the html file, this week's page is now available.

Speaking of updates, the Spanish version of the comic is now available.

Every saturday. Including today.

Can you blame him for leaving tho? I mean, the conclusion "Karen" made and how Boomer reacted made it pretty obvious that it was more of a bullseye rather than a hypothesis. Plus, a date Miles planned out just turned into a big disaster so he saw nothing else to do but leave.

Both me and Miles: "Why do people treat me like sh**?"

Aaaaaand he left...I can't really blame him for feeling that way but damn maybe the embarassment along with the pain was a too much for him...just like how it was too much for me.

Fuck man, deny it all!

Karen's in a LOT of trouble now!!! I can relate to Miles cuz the "Pretending that I was her boyfriend" shit happened to me as well.

Really hope you weren't the Karen in that situation

Thank you for replying, but no, I was the "Miles" in the situation.

Karen is a literal KAREN! I love how this all seemed to be planned out from the very beginning. *plot intensifies*

now the plot is starting, cant wait to see where this is going

Don't know if this is a bug or something, when I click to see the comic here on itch I only see the flag and the patreon buttons. Doesn't let me scroll up or down...

It's the Select language menu, you just have to click on the flag

It's new, yeah, I'll be adding a spanish translation once they're done, and Patreon bonus panels and pages once enough time has passed.

if i'm the wolf, i would hold the woman, left her up to stand, ask if she is alright, then without waiting, sit next to the hot tiger ignoring what the woman is going to say or do. and take the pieces of salad off the tiger face by my mouth, one at a time. woof. i want that tiger so bad

hmmm, try to show appreciation to the author instead of arguing with the people, share love not hatred

hahah
this is hilarious. i cant wait.. you are great. soon, i will patreon

Added a small "select language" html page at the start of the comic which for now only has an English option, I'll begin uploading the Spanish translation soon(tm).

The latest update is good yet funny at the same time! Keep up the great work!

Forget the op! XD Next updates will be priceless!

Such good work. Thanks

Your story is getting better and better with each update~! 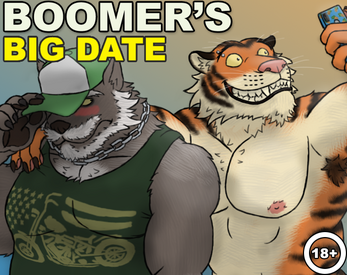