nanoff is the author responsible for all of Boomer's Big Date, but since that start I've been on the background monitoring the traffic data for the project, so I decided to write a sort of Postmortem dealing with the data and platform-related side of things. We have a lot of neat things to show and learned a few lessons that should be applicable to LGBT game developers and comic artists.

Boomer's Big Date is a 51-page long comic book about "revenge gone horribly right." It stars "Boomer", a divorced mechanic who learns via Facebook that his ex-wife, Karen, skipped her day with their son to go to an office party with her latest boyfriend. Boomer's boss, Joe, then recognises Karen's boyfriend — he says the guy was in a gay hook-up app. Joe convinces Boomer to have sex with the guy, take a picture of the deed and then show it to Karen to get back at her.

Up until this point in his life Boomer has been secure in his heterosexuality, but his first encounter with Miles, Karen's boyfriend, catches him off-guard with how much he enjoys it. He finds himself coming back for more, always stopping himself from taking the picture, and he starts nurturing some affection towards Miles. But eventually he is forced to face the fact that his motivations for starting this were fundamentally wrong and deal with the consequences.

The Format and Business Model

Boomer's Big Data was published in a weekly format — every Saturday evening nanoff would post a new page on Twitter.

Starting on October 2020, nanoff opened a Patreon where readers could pledge an amount to gain access to the following week's page early. Around that same time the comic was posted on Itch.io to facilitate reading, since Twitter's interface is horrible for reading sequential pages of a comic.

Since its release back in October 2020, Boomer's Big Date has been accessed over 30,000 times on Itch.io. This does not count the number of times it was read on Twitter — which probably outnumbers this by a vast amount.

Over this period, nanoff's follower count on Twitter grew by the thousands (sometimes over 600 new ones in a single day), his Patreon became an invaluable financial safety net and Boomer's Big Date became Itch.io's highest rated comic.

So, it's safe to say the reception was good — and that leads us to asking why and what lessons we can take for other LGBT content creators.

It would be naive, however, to say that the sexual content did nothing. My own assessment is that first it served as an attractive hook for the story, but what made it work was that the sex was the means by which Boomer's and Miles' characters were established and developed. In a sense, the sex was an engine for the narrative and it set the stage for the final part of the story, which took a turn for the heartfelt and honest as Boomer is made to confront his hypocrisy.

I think Boomer's Big Date serves as a very concise and clear case for something I've long believed about fiction aimed at gay and bisexual men: there is a large demand for media which is, all at once

With that out of the way, it's time we took a look at the data. Today we'll first examine first Boomer's Big Date's lifetime data and compare it to our other projects, then show in greater detail how the traffic graph looks like.

As you'll see in a minute, Boomer's Big Date and how it compares to our other projects (Minotaur Hotel, Minotaur Hotel: SFW Mode and Orc Breeding) make up a very insightful portrait of how Itch.io deals with comics in comparison with games.

Before I show the data, here's a handy legend:

So, as far as Itch's algorithm is concerned all these projects come from the same team of people. All except for Minotaur Hotel: SFW Mode are tagged as NSFW. Not only that they share a single main core of tags:

But, as you can see, they all have vastly different performances. Why is that?

Why is that? Simply put, it's because you need to go to the comics tab, while all Itch users are dropped on the Games section by default.

So, is that the conclusion? That the comics tab is underused?

Nope! It goes a little deeper, but to get to that we need to look at another piece of data... 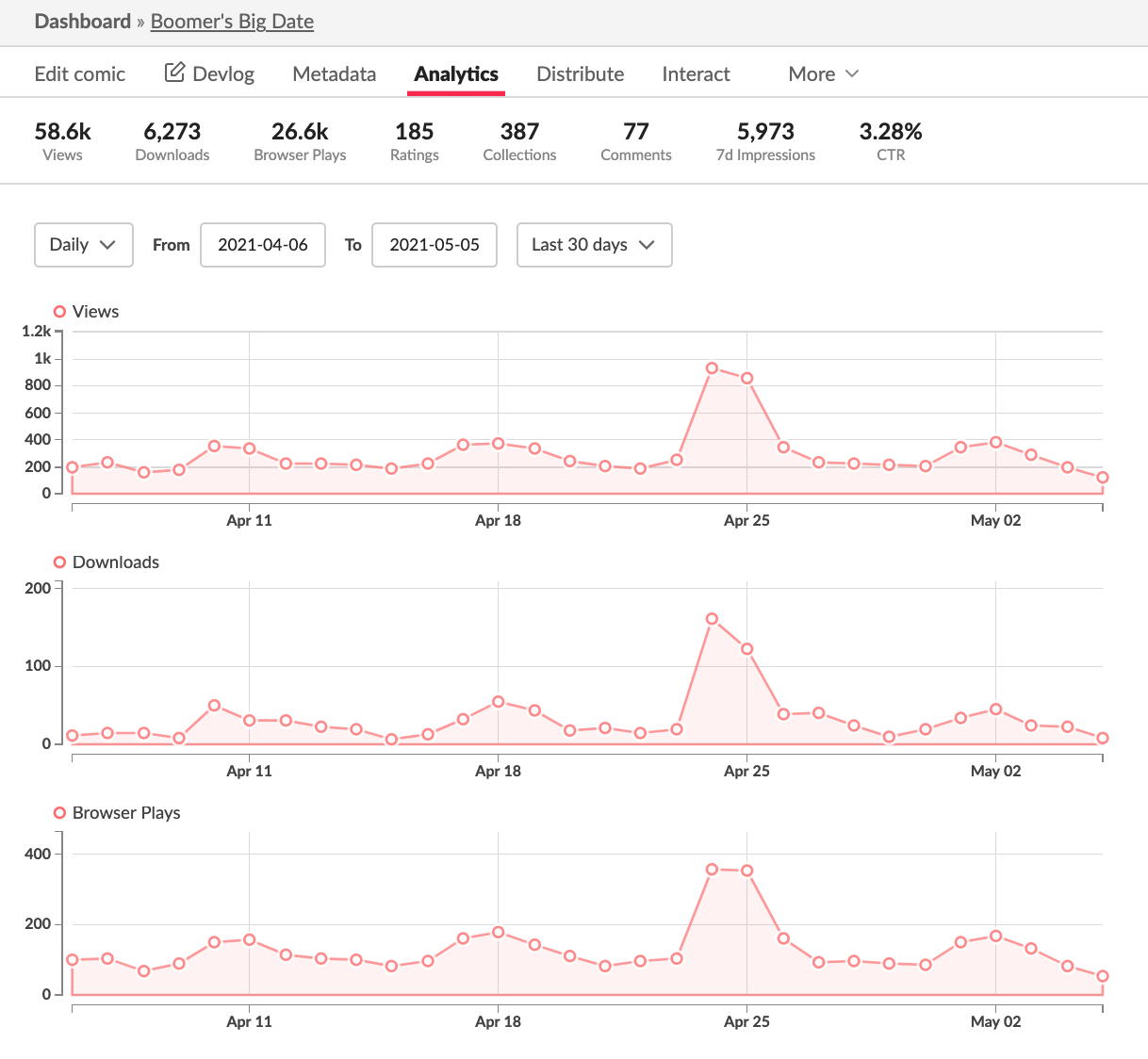 Let me rephrase this: Itch.io's Comics section is underused and under appreciated, but it has enough of an user base to outperform even one of the top rated games on the platform if you use the tools at your disposal. So... if you are a comic book artist looking for a place to compile your work, Itch.io is a pretty decent one!

That said, I really do meant it when I say you need to use the tools at your disposal: make the best, most eye-catching cover art you can! Since your Impressions are low you need a great cover so lots of people click on it!

Now, let's take a look at more data, shall we?

Pageviews and Downloads Over Time

So, before we start, the first image you'll see shows the month of October with the game's release included and the second image shows the data for October and November while excluding the release. This was done because, as you can see in the first image, the release peak was so high it made the rest of the graph not very readable. 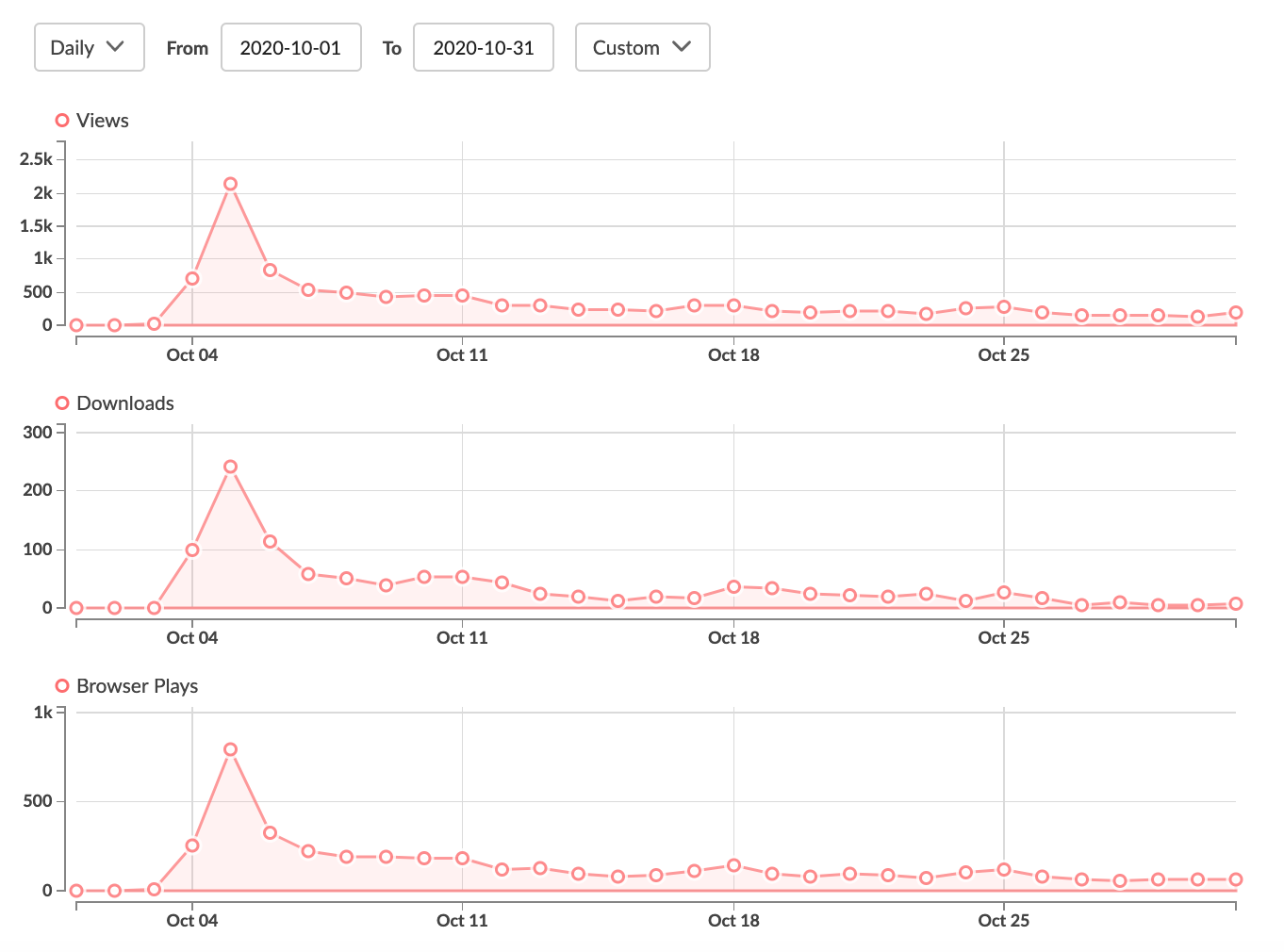 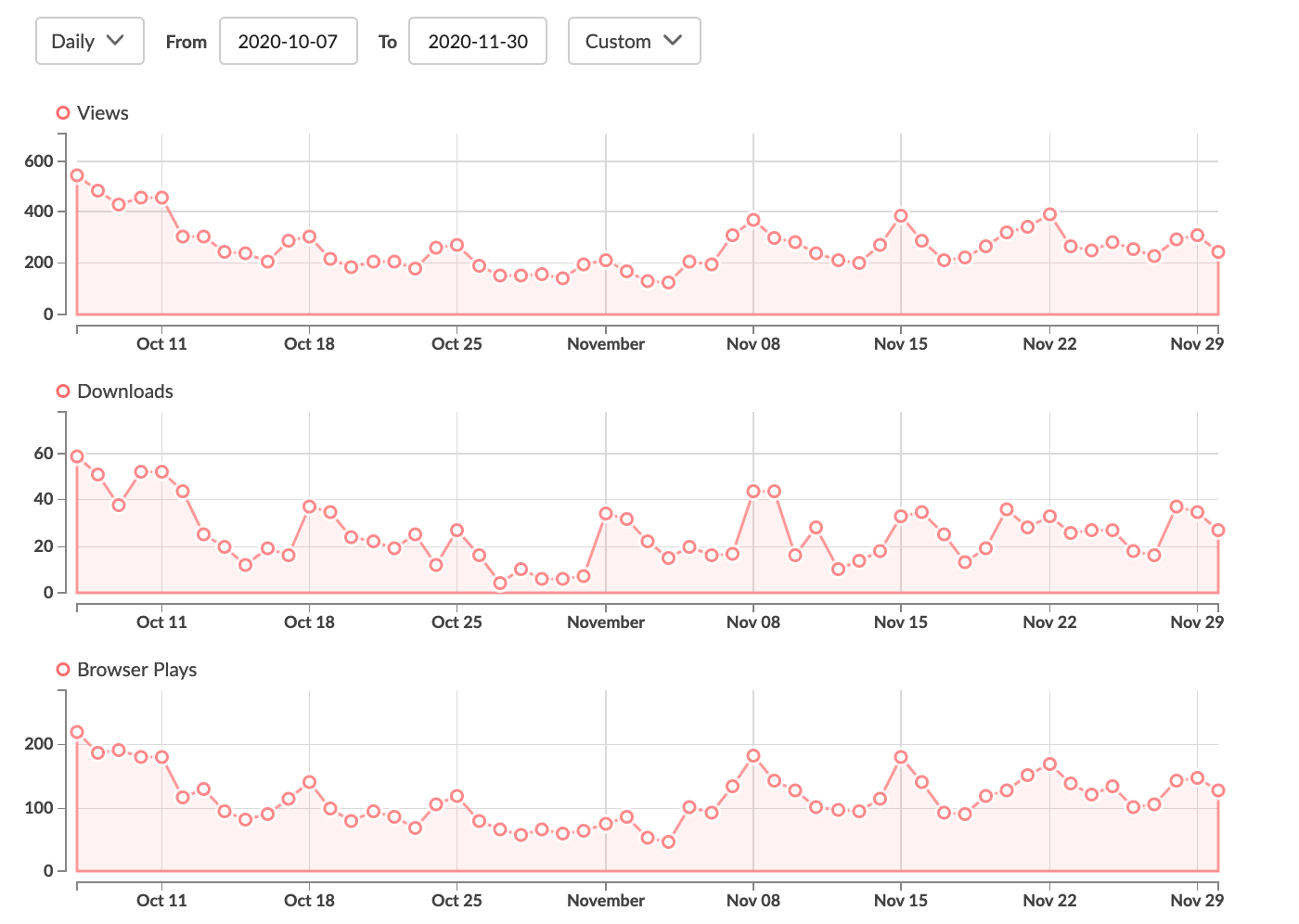 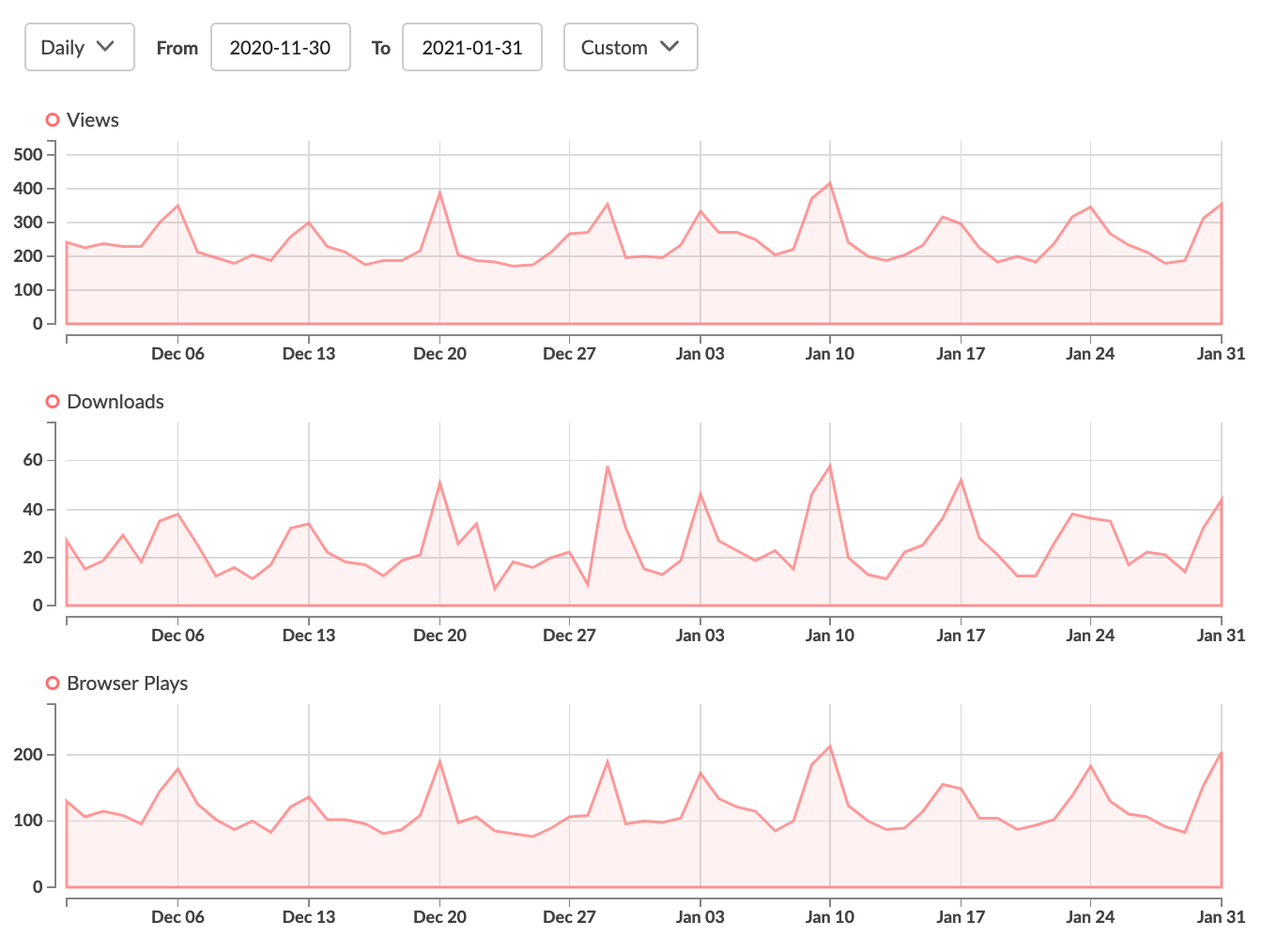 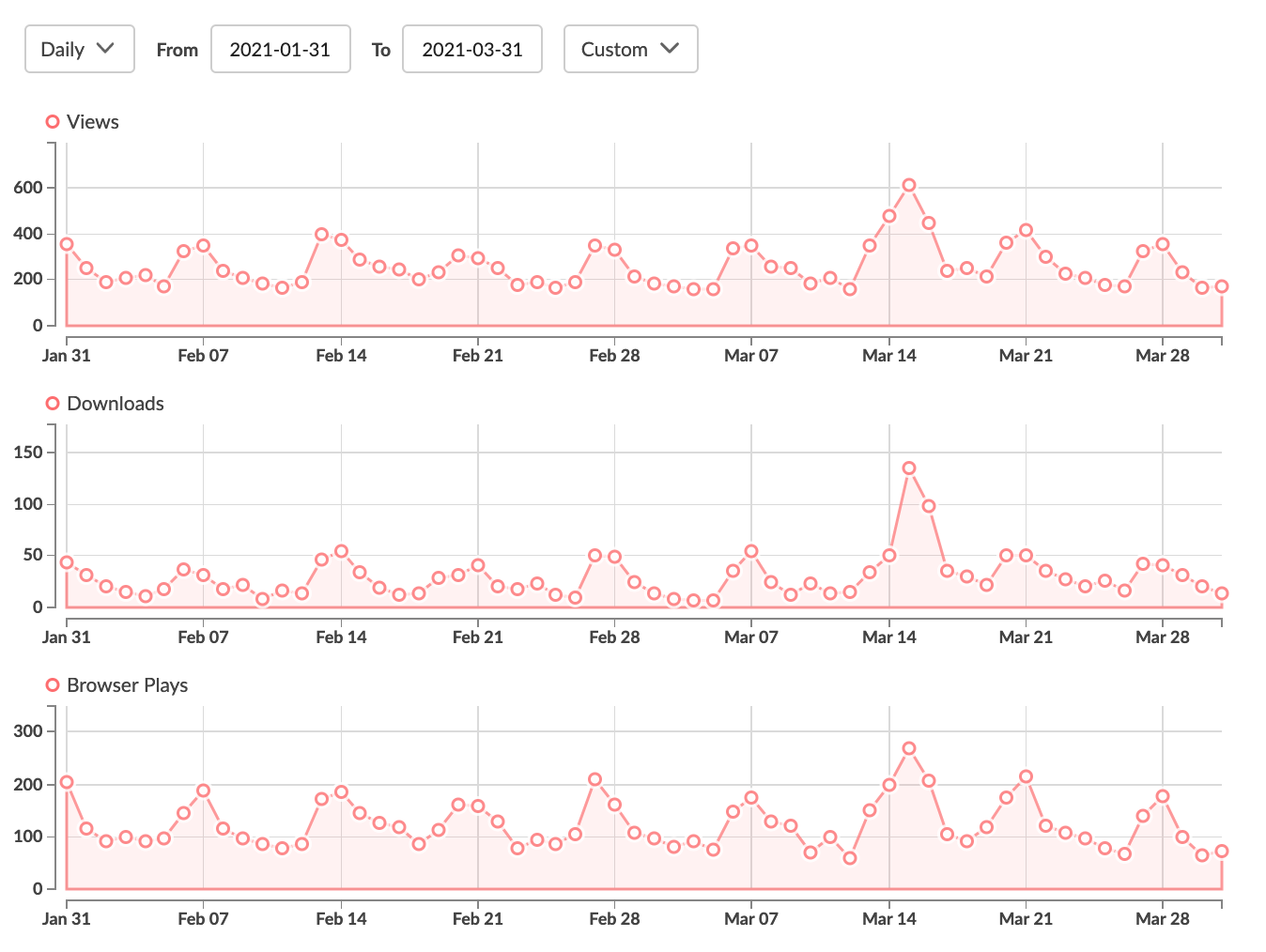 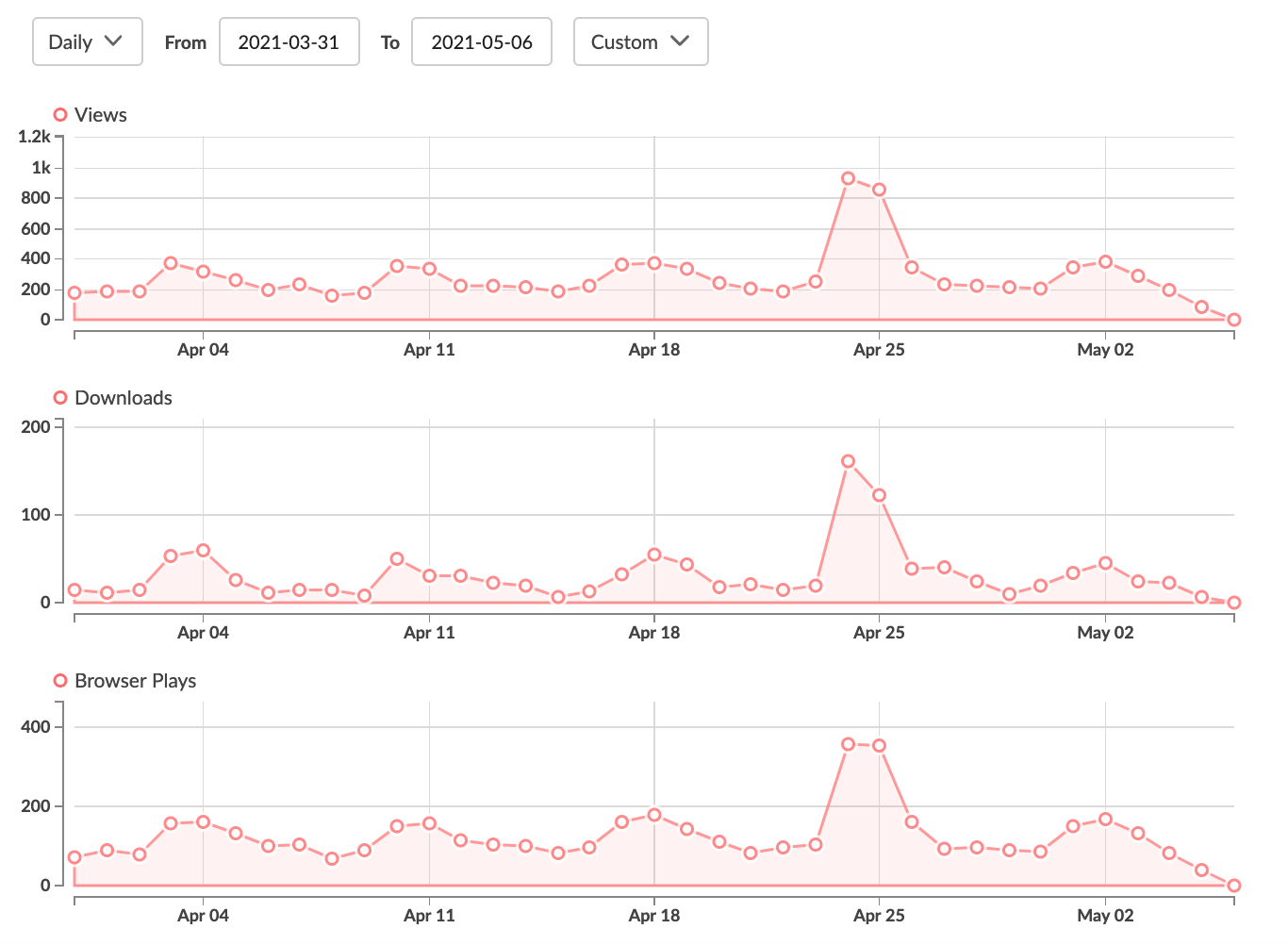 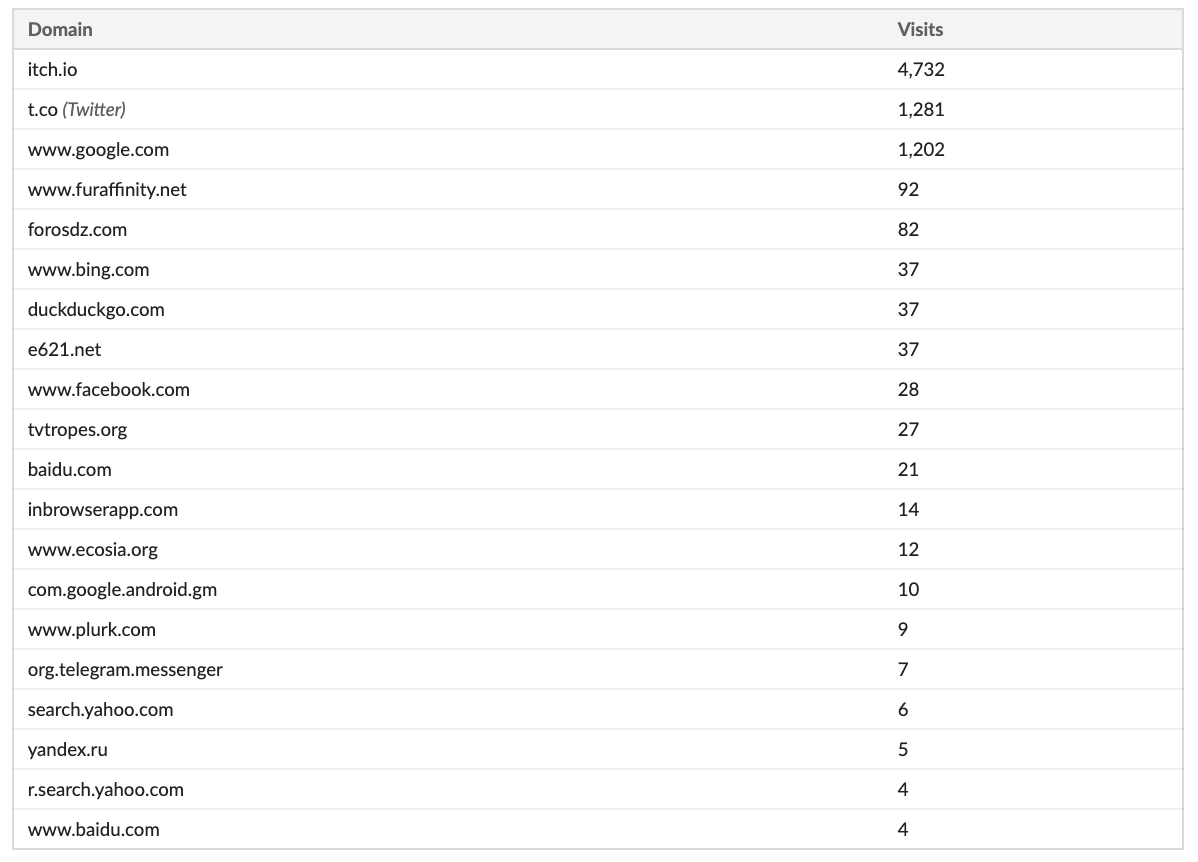 As you can see, most of our traffic comes from within Itch.io... And, to be more precise, there's a confounding factor at play here.

That graffic greatly overplays the influence of Twitter. As you can see here, Twitter helped a lot recently (that peak was the day the last page of the comic was posted here!) but on the typical day it's not a game-changer.

Another look at it. As you can see, Itch is the biggest source of traffic on most days.

In terms of what this data means, there's another lingering question we have not yet examined well enough to give any conclusions, but I believe it's the next big question pertaining to all LGBT creators on Itch.

Simply put, any cursory glance on Itch's 200 Top Rated games right now will show you that LGBT games are very common there despite only making a tiny fraction of all games on the platform. Why is that?

Is it because LGBT games are just, well, better? Is it because they are the most downloaded ones? Is there some kind of complicated multi-factor thing going on?

Yes, I think there is a complicated confluence of circumstances. I won't go into details here but, looking at the data we showed today, I feel secure enough giving my hunch for what may be one of the factors: I think that LGBT users are more engaged than the average, more willing to display their appreciation for the games they enjoy. And that, among other things, may explain why LGBT content is doing so well here.

But that's talk for another day. Thank you for reading!

This comic was just a joy, the attention is deserved. I looked forward to Saturdays because of it, and look forward to more in the future!

Thinking a little more about it, I see other reasons for the success of the comic in this platform as it relates to its nature.

First is how the comic benefited from being associated with Minotaur Hotel.  The game's fanbase is composed of dedicated users that are spurred by its creators to use exclusively itch.io for both interaction with fellow fans and devs, as well as obtaining the visual novel itself. What that means is that (what are likely) the first "fans" of the game here were people that were knowledgeable of the platform and eager to engage with and share it.

Secondly (which I personally find most interesting) is the comic's characters and art. Should one go to the front page of itch.io's comic page and filter so only those with the Gay tag show up, they will find a plethora of "pretty boy" and "anime" archetype stories or artwork. Such, of course, is not a deterrence to their success, but if one "cross-references" with MinoWorkshop's Furry Visual Novel Audience Survey, they will find an overwhelming bias towards "manly" or buff (Bara) men in their content. Of the comics found in said comic page, few seem to cater to such demand, except BBD; the only large exception being comics by prolific furry artist Maririn however most of them are priced. Granted, said survey was aimed at VN consumers. Combing further with free and adult (erotic) tags, and one should pretty easily notice the void this comic superbly fills.

"Then, this comic ain't that good and only thrived through its circumstances?" Not so. What has been said so far only relates to the success found in this platform. Speaking as someone who actually stopped checking the comic here because I became a patron, I can attest to people enjoying it regardless of itch.io and even Minotaur Hotel.

I'm obviously a fan of this artist and comic and I do believe wholeheartedly the success is deserved. Thought I'd share these observations I realized reading this.